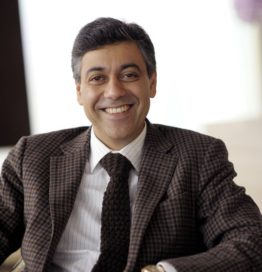 Deepak Ohri and lebua Hotels and Resorts have become synonymous with luxury and sophistication. Joining the company as its first employee 15 years ago, Deepak Ohri has since earned recognition as the visionary CEO behind the lebua brand. Central to Ohri’s success is his unique vision of hospitality which he believes should be on creating lasting emotional connections for guests, something that has not only informed his vision for lebua but has now become an industry-wide trend.

Under Deepak Ohri, lebua quickly became a trendsetting international luxury brand. Often credited with kicking off the rooftop dining craze, lebua Bangkok is also known for being the setting of the Hangover II movie, which earned its Sky Bar and Sirocco restaurant international recognition. Today lebua operates a distinctive family of hotels, restaurants and bars, including Bangkok’s best performing luxury hotel, the Tower Club at lebua and luxury resorts in Lucknow, India and Rotorua, New Zealand, as well as an upcoming resort at Jim Corbett National Park in India.

The Dome at lebua, the brand’s signature collection of restaurants and rooftop bars, which includes Sirocco and Sky Bar, has also received international acclaim. Perched among the clouds and boasting breathtaking city and river views, The Dome’s dazzling collection of bars and restaurants includes lebua’s flagship and now two Michelin-starred restaurant, Mezzaluna, as well as the recently launched Alfresco 64 – A Chivas Bar. Alfresco 64 is part of an ongoing partnership with Pernod Ricard which also brought about Flute – A Perrier-Jouët Bar, the highest open-air champagne bar in the world.

As part of his vision for lebua, Ohri has continually placed lebua ahead of industry, first with his approach to luxury, then with the rooftop bars and restaurants trend and now building destination hotels and blending eco-tourism with lebua’s signature luxury experience. Thus far Ohri has strategically built the lebua brand, with a focus lebua’s dining concepts, to reach three continents and plans to expand further to become a leader in extraordinary destination cities worldwide.

A further testament to Ohri’s success at the helm of lebua, since joining and building lebua into the powerhouse it is today, Deepak Ohri has been recognized as an award-winning entrepreneur and celebrated speaker. Ohri also regularly connects with students and speaks at business schools worldwide including Harvard Business School, Columbia Business School, London Business School and MIT Sloan.