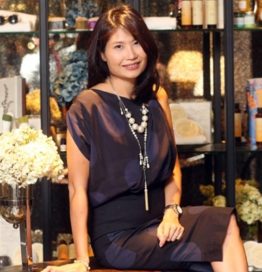 Lily Udomkunnatum is the Founder of Burasari Hotel & Resorts and Managing Director of Burasari Group. Lily has over 16 years experience in real estate investment, project management and transactional deals in Asia and the United States.

Lily’s next project is a 1.9 billion baht development of a luxury villa and hotel property on Koh Mapraw Island, off the coast of Phuket. In 2008, Lily launched the Spa Burasari brand, whose award-winning wellness programs are regarded as the region’s most creative and innovative. Lily serves as the Managing Director of Bursari Group, a hospitality management company that brings Burasari brand standards to boutique properties in key markets across the region.

Lily was formerly the Assistant Vice President of the Mergers and Acquisitions Division at Bears & Stearns in New York City, where she led multi-million dollar deals involving Macy’s Department Store and landed significant high net worth clients. She was also the co-lead for Bears & Stearns Deal of the Year, where she helped broker a $400 million investment deal for Hess Corporation. Lily received her MBA from University of Michigan, and she is a graduate of Columbia Business School Executive Education program in New York City.